Making a Merry Go Round Memory in 2016

Memories from the Summer of 2015

The Carousel of Light experienced a spectacular Fourth of July weekend. Sunny skies and cool breezes made the crowds on Saturday patient while waiting for a ride and then a second and third ride. On Sunday, our “Good Ol' Summertime” event was well attended and we thank our many volunteers.
The Falmouth Commodores Michael and Steven were a big hit with the kids and parents as well. Their summer intern Brittany kept things moving well.
Our free ice cream stand, compliments of Pies a la Mode Cafe, dished out the flavor cotton candy.
Another big winner, Al Moniz/Mr. Suspenders kept the groups clapping and in awe and even included the children in his juggling act.
Our lawn games of hole in one-or-two, balloon toss, tug -o-war-and-peace, Frisbee throw and three-legged races were very popular and the volunteers from the YMCA North Falmouth program were fun and helpful. Prizes from the First Citizens' Federal Credit Union brought glee to the eyes of the children.
Carousel board members Jim Bowen, Joanne Treistman and Stanton Terrell were there at 9 a.m. to get everything ready with our manager Beth Juaire and assistant Susan Lefcourt.

A day at the Carousel of Light ~ photos by Beth Armstrong

Everyone Loves a Carousel!

We have hosted many groups this summer. One of the happiest groups were the residents at Atria Woodbriar. Some of these guests were in their 90's and had as much enthusiasm and vigor as any child. Special thanks to Melissa Bielinski, the Engage Life Director who brought Gina, Carol Mary, Myrtice, Mary and other lovely ladies to enjoy the Carousel of Light. 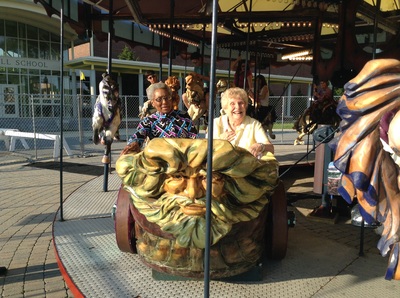 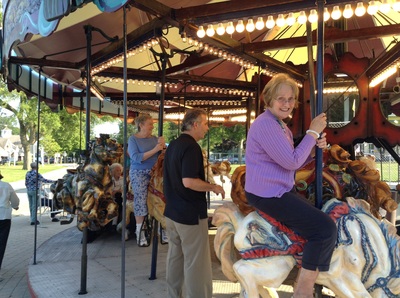 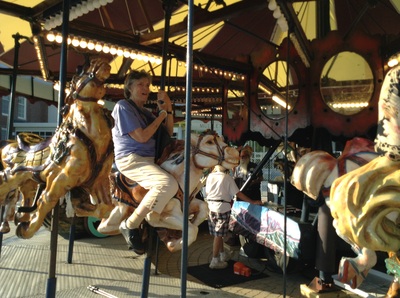 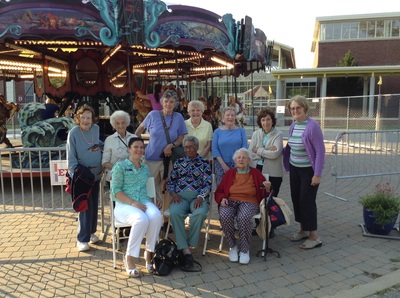 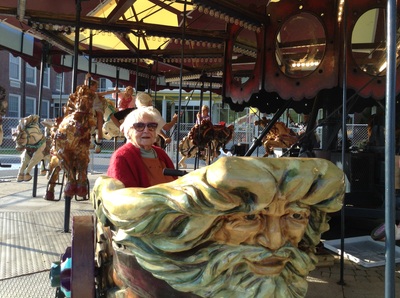 Everyone Loves the Carousel- Pictures from Opening Day 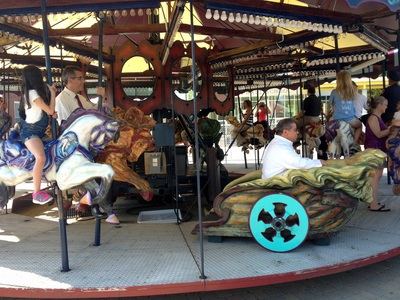 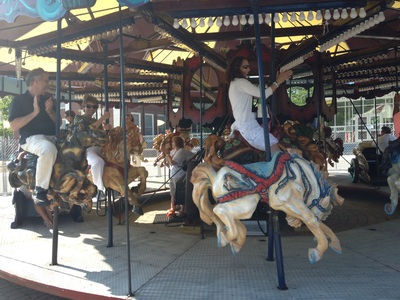 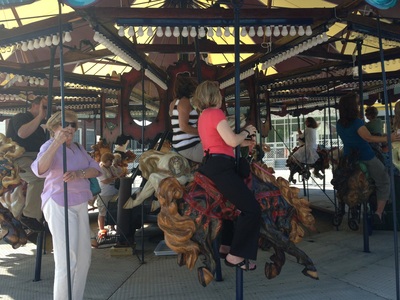 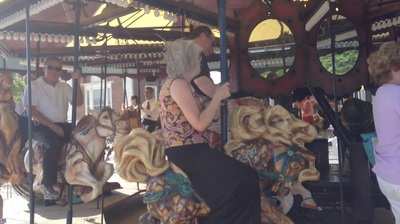 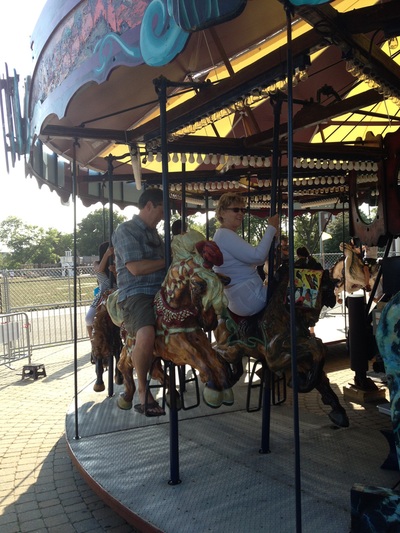 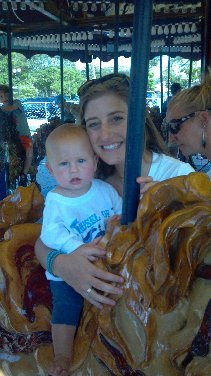 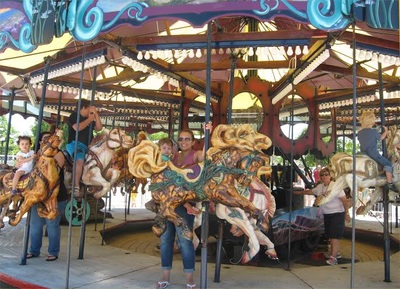 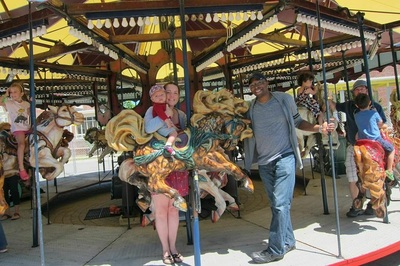 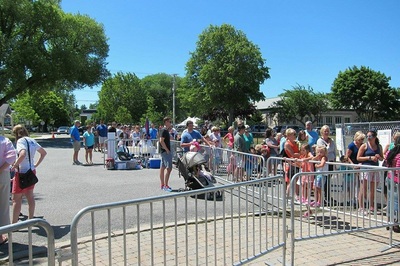 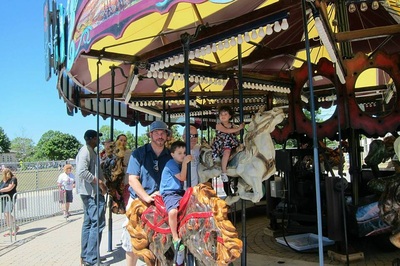 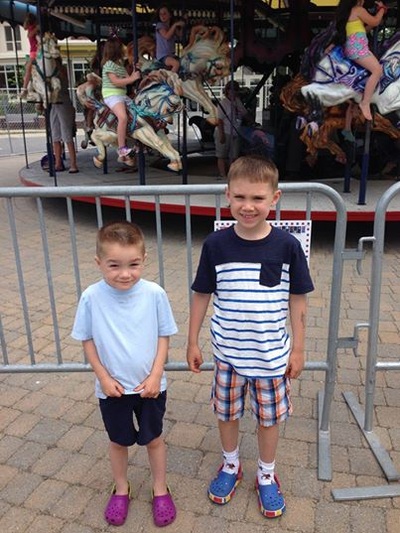 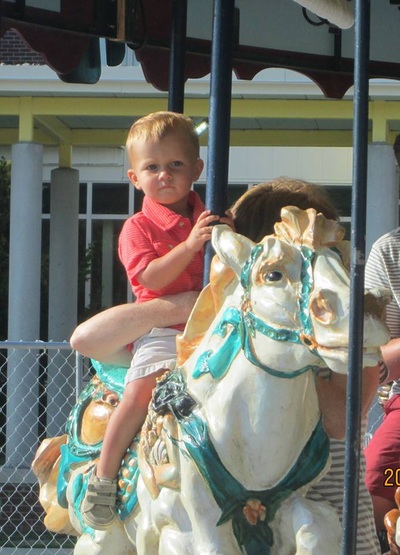 Getting ready for the Summer

On June 26th we moved the carousel to the Mullen Hall School grounds. During the months of July and into late August, the Carousel of Light will be operating 7 days a week. Everyone is invited to take a ride on the magnificent work of art. Hours are 11 am  8 om (or sunset~ which comes first). Sundays beginning at 12 noon. The cost for a ride on the carousel is $3. A book 10 rides is availability for $20. Only cash is accepted.

Thank you to everyone who attended the 2nd Annual Food Truck Festival at the Falmouth Marina Park on June 14. Despite a gloomy forecast the rain Gods came through and provided us with a glimmer of sunshine throughout the cloudy day. This year we featured 12 trucks and other special events to over 1,000 visitors and residents alike.

The 2nd Annual Food Truck Festival would not have been possible without our  board members Elizabeth Sherman, Lissie Hoffert and Nick Kleimola.

During the month of July, the carousel was set up at the artist's home for renovations and repairs. After certification the board took it's first ride.
Photos by Kristin Alexander and others

Loads of Fun at the Food Truck Festival- 2013

May 18th was the date the food trucks rolled into town.  More than 800 people turned out on Saturday at the Carousel of Light Food Truck Festival at Marina Park.

Seven food trucks from the Cape and Boston area participated, as well as three bands, juggler and unicycle performer,  and several face painters.

The carousel arrives from California- March 2013

On a cold morning in March, two semi tractor trailers arrived from a long trek across country to carry the carousel back home to Falmouth. Several hardy volunteers helped unload the animals. Hats off to Wood Lumber for the use of it's forklift to unload the eight ton mechanism from the trucks.
The horses are now stored in Lance's studio where he will lovingly refurbish them one at a time.
Photos by Amy Rader Photography