The Carousel of Light Story 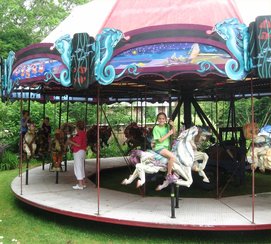 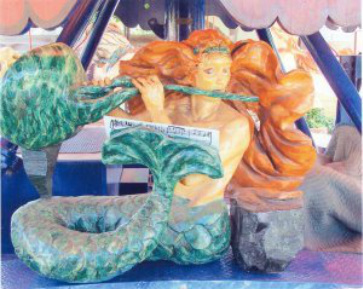 This is Bubbles. A wheel chair assessable chariot that really blows bubbles
Chelsea loved the book so much that her Dad, a local Cape Cod  sign carver and artist began to create his opus;The Carousel of Light. Lance’s shining masterpiece, is now a hand-crafted and meticulously painted carousel, each piece lovingly carved from a block of wood and transformed by a man’s vision, passion and gift into elaborately decorated horses and other elaborate and colorful segments of this beautiful orchestra of amusement. 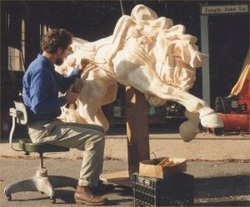 Lance began the task of hand-carving each horse in 1988. The creative process begins with an original drawing by Lance,which is transferred onto a set of wooden planks, each plank a cross section on the horse. Lance devised the carving system to achieve animated forms and greater strength.The planks are laminated together to create hollow block of wood in the rough shape of a horse. A chain saw is then used to carve out the contour. The figure is finished with hand chisels and sandpaper, and the horses were color-dyed and painted.

Lance has created 20 horses, two chariots and three ornamental sculptures. He has painted 12 colorful scenery panels to decorate the carousel. The nautical-themed carousel includes sea horses, mermaids and fishing nets in the same windblown style of the horses and chariots. 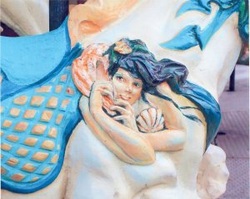 Detail of the intricate artwork
The carousel debuted in July 1993 at the Barnstable County Fair. After, it was displayed throughout Cape Cod to rave reviews from children and adults alike.  Lance moved to California in 1999 to be with his ailing father and took the carousel with him. After his father died in 2009,Lance returned to his home in Falmouth.In February of 2013, Lance shipped the carousel back to Falmouth. Lance has donated his masterpiece to the Carousel of Light, Inc. 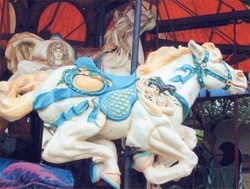 A white stallion rides to the rescue!
The 501(c)(3) non-profit corporation is hard at work to bring this dream into reality. Funds are needed to repair, restore and maintain the horses and the vintage 1947 Allen Herschell mechanism that makes the merry go round spin. Donations can be made online or by check payable to Carousel of Light Inc. (tax ID 04-322147) at 17 Meadow Lane, Falmouth, MA 02540
Proudly powered by Weebly